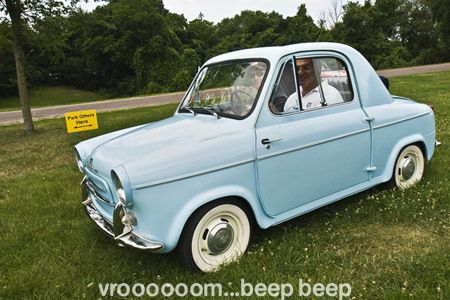 Vespa 400 with unidentified driver and passenger.

One day I’ll get to writing about graphic design again. In the meantime, enjoy all the other beautiful things this world has to offer.

Take the Vespa 400, for instance. A project I’m working on, which involves Vespas, led me to Smaller Is In!,a blog entry featuring a photo of this diminutive wonder. Needless to say, it was love at first site.

While I’m a more of a cyclist than a driver, growing up in Jersey gave me an appreciation for cars. Like practically all Jersey kids, I once owned a Honda Civic. Luckily, I wasn’t wealthy enough to trick it out. The only “modification” my car had was a broken speedometer whose needle would bounce erratically once the car went over 50 miles per hour. Also, I didn’t get my car until I left for college in NYC, so it ended up sitting around in the driveway until I sold it after my second year of college.

Nevertheless, I do someday hope to purchase a car. Perhaps when the rising sea levels finally flood my neighborhood, along with the rest of New York City, and I’m forced to find lodging in Detroit, Texas. Instead of purchasing myself a refurbished Mini Cooper, as I had originally planned, I’ll opt for something classier, that’ll get me instant street cred with the handful of microcar enthusiasts in the Greater-Detroit-Texas area. The ex-girlfriend who once threatened to break up with me if I ever purchased a Mini Cooper would be pleased to know that I have found an even kitschier, retro-styled car to adorn what would have been our hypothetical four walls and adobe slabs. 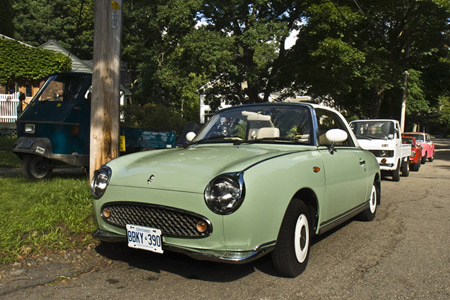 The Nissan Figaro is to the Mini Cooper what Sailor Moon is to Josie and The Pussy Cats.

If for some reason I can’t get my hands on a Fiat 400, I’d gladly settle for the Nissan Figaro. I encountered this vehicular equivalent of delicious lentil soup while hunting down photos of the Fiat 400. Sadly, the car wont be street legal in the US til the year 2016 when it gets classic car status. Till then, I’ll compulsively return to this Car Lust blog entry, when my knees hurt from riding around town on my relatively uncool commuter bike.

This entry was posted on Monday, August 10th, 2009 at 2:08 pm and is filed under Design, Inspiration. You can follow any responses to this entry through the RSS 2.0 feed. Both comments and pings are currently closed.